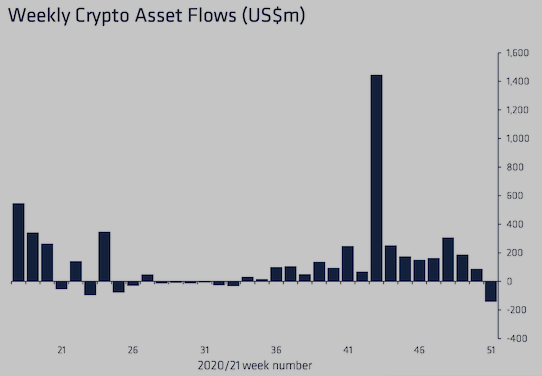 With cryptocurrency markets drifting downward, digital-asset investment products have suffered their largest weekly redemptions on record. Investors pulled money out of funds focused on bitcoin and the currencies of Ethereum, Solana and Polkadot, as crypto markets retreated.

Following a 17-week run of inflows, outflows from cryptocurrency funds totaled $142 million during the seven days through Dec. 17, according to CoinShares, a digital-asset manager that compiles the industry data. The largest previous outflow on record was in early June, when net redemptions surged to $97 million.

Investment funds focused on bitcoin, the world’s largest cryptocurrency by market capitalization, had $89 million worth of outflows last week. That’s a reversal from the $145 million of inflows the prior week.

The report noted a number of factors contributing to the surge in outflows. There have been considerable outflows from all risky assets, not just digital assets, said the report. One trigger may have been the recent signals from the U.S. Federal Reserve that it’s accelerating the withdrawal of monetary stimulus that helped to prop up asset prices over the past couple years. CoinShares noted that cumulative inflows into crypto funds hit a record $9.5 billion this year, eclipsing the 2020 total of $6.7 billion.