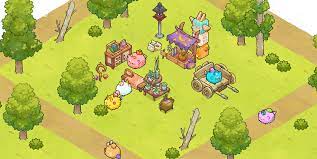 Samsung‘s investment subsidiary, Samsung Next took part in a US$152 million Series B round of Sky Mavis, developer of the popular crypto-based online game, Axie Infinity.

Samsung Next, the tech giant’s investment subsidiary, participated in a US$152 million Series B round of Sky Mavis, the Vietnam-based blockchain game company and developer of popular play-to-earn game Axie Infinity. Samsung has previously invested in blockchain game developers including Dapper Labs, the creator of CryptoKitties, and Hong Kong-based Animoca Brands.

Kim Jeong-soo, professor of industrial management and engineering at Myongji University, says the reason for Samsung’s investment is simply for high ROI (return-on-investment). “Samsung knows that Axie Infinity is the hottest thing right now, as it did with CryptoKitties before. Furthermore, it could mean that the company recognizes how prominent blockchain and NFTs have become,” Kim said.

However, within South Korea, Samsung’s home base, games with any elements of blockchain or NFTs (non-fungible tokens) are blocked from release by the country’s Game Rating and Administration Committee, which says in-game random rewards, with some of them being NFTs, may encourage speculative behavior.

Kim believes the government will ease restrictions on blockchain games at some point. “Because the government is very much focused on [developing] the metaverse, the topics of ownership and value transfer in virtual assets is likely being discussed in a very positive light,” he said. “So any developments from [that discussion] may send positive signals to the situation we’re seeing with blockchain games.” Kim says in the meantime, the gaming industry will need to discuss eliminating the speculative factors.

Axie Infinity is an online game often compared to Pokémon, where users are rewarded in NFTs for breeding monsters that are known as “Axies.” Since its release, the game has gained a huge fan base in developing countries such as the Philippines and Venezuela.