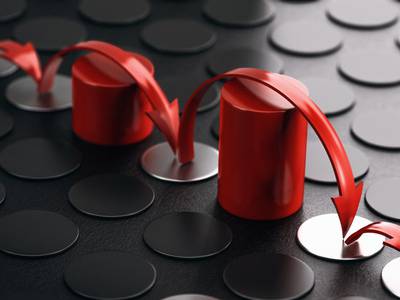 Bitcoin volume has increased the past two days but remains well below its mid-October high. Bitcoin was roughly flat the past 24 hours, trading at about $67,300 at the time of publication. The No. 1 cryptocurrency by market capitalization spent most of U.S. trading hours on Tuesday ranging between $63,500 and $68,500, with a slightly elevated volume across major centralized exchanges. Ether was down about 1.3% over the same period, trading at just above $4,700.

Data shows that bitcoin’s trading volume has risen in the past two days, but it is still far from the high level last seen on Oct. 15. Meanwhile, the bitcoin Fear & Greed Index, which entered “extreme greed” territory on Tuesday, was at the highest level since Oct. 21, which preceded a sharp sell-off in bitcoin. The index measures market emotions: When investors are too greedy, the market may be due for a correction soon.

The kind of FOMO (fear of missing out) on the current market is also reflected in the rally of several alternative cryptocurrencies (altcoins), such as loopring (LRC), livepeer (LPT) and litecoin (LTC). According to analysts, the reasons behind these rallies are more speculative than market fundamentals (notice that the three tokens share similar tickers).

“I don’t know if there’s a specific catalyst for livepeer’s recent price performance,” Messari research analyst Mason Nystrom said. He pointed out that the most recent development on Livepeer, an open-source video platform based on Ethereum, was the acquisition of MistServer, a streaming media server, on Oct. 19.

There have been rumors that the Loopring project is helping GameStop build its first non-fungible token (NFT) marketplace. Daniel Wang, CEO of Loopring, said “no comment” on the GameStop hearsay to CoinDesk. At the time of publication, GameStop had not responded to CoinDesk’s requests for comment.

Bitcoin (BTC) is relinquishing some gains after reaching an all-time high near $68,500 on Monday. The cryptocurrency is overbought on intraday charts, although support around the $63,000-$65,000 range could stabilize a pullback.

The relative strength index (RSI) on the four-hour chart is the most overbought since Oct. 20, which preceded a near-10% price decline. Still, pullbacks have been shallow over the past few weeks as buyers remain active on breakouts.

The 100-period moving average on the four-hour chart is sloping upward, indicating positive trend strength over the short-term. This means buyers could eventually return on price dips into the Asian trading session.