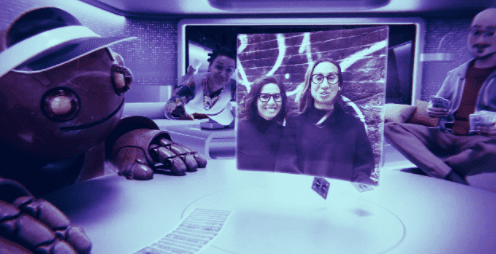 Social media Facebook recently amplified its plans for the coming Metaverse, not only showcasing its vision in a streaming presentation but actually rebranding its parent company Meta alongside. Not everyone is thrilled about the social media giant’s intentions for the future vision of the internet, however, including a co-creator of the hit Ethereum-based GameFi project, Axie Infinity.

During a crypto gaming panel at the NFT BZL conference in Miami on Tuesday, Sky Mavis co-founder and Growth Lead Jeff “Jiho” Zirlin joked that Meta “copied our logo,” citing similarities to Axie Infinity’s own branding. He then spoke more seriously about the coming challenge from Facebook and other established, centralized web firms.

“I think we are entering a battle for the future of the internet,” said Zirlin. “But I think that we have a lot of trends on our side. We're starting to see that grassroots internet communities are having incredible power in the physical world as well.”

It’s a perspective that we’ve heard in various forms from the crypto community in recent weeks following Facebook’s late October moves. Many startups in the blockchain industry are working on infrastructure and assets that will be a part of the proposed metaverse, with a focus on interoperability: that digital items can be openly used across platforms and spaces.

Although Facebook claims that it will help build the metaverse “responsibly” and that it will not be created or controlled by one company, some are suspicious of the company’s aims. Yat Siu, founder and executive Chairman of metaverse investor Animoca Brands, recently told Decrypt that he sees Facebook and Chinese tech giant Tencent as a “threat” to an open metaverse.

“The stakes are going to get larger and larger, and we're going to face more powerful enemies,” Zirlin said during Tuesday’s panel.

“They're going to try to squash this beautiful thing that we built because it threatens them—it threatens their business model, their way of life, and their philosophy,” he continued. “We are going to see this battle between grassroots internet communities and the large corporations that are trying to basically buy the soul of the internet.”

Axie Infinity has rapidly become not only the most successful blockchain-based game to date, but also the largest overall NFT project in terms of trading volume. NFTs are unique tokens that represent digital ownership rights to an item as verified by a blockchain. The play-to-earn NFT game counts some 2.8 million daily active users, Zirlin said Tuesday, and it has now generated more than $3.5 billion in NFT transactions per data from CryptoSlam.

Zirlin also suggested during the panel that Axie Infinity’s growing fanbase could eventually spill over into the real world, with physical locations serving as hubs for players—or even the creation of a real-world nation for Axie enthusiasts.

“I believe that we will transition successfully from being a burgeoning digital nation state to actually having a homeland where all Axie owners are welcome,” he said. “Hopefully, we can make Miami one of our Axie cities across the world. But I think long-term, we may need our own homeland that is recognized by the UN.”