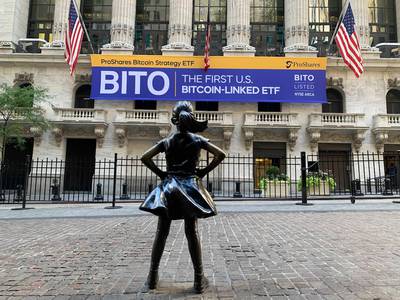 The first US Bitcoin-linked ETF fund, ProShares’ BITO jumped 4.8% to close at US$41.94. Bitcoin also soared to more than 4% in early Wednesday morning to US$64, 390 according to CoinCap.

The largest cryptocurrency has climbed 33% over the past month on expectations the U.S. Securities and Exchange Commission (SEC) would approve the exchange-traded fund, which invests in futures contracts tied to the cryptocurrency.

The ProShares Bitcoin Strategy ETF started trading at 9:30 a.m. ET as the bell rang to open the day’s session on the New York Stock Exchange. The stock ticker is $BITO.

First-day trading volume in $BITO appeared strong, with at least 1.89 million shares of the ETF changing hands in the first couple hours, or more than $770 million worth.

The first of its kind in the U.S., the ETF offers investors the opportunity to gain exposure to returns of BTC with the ease of buying a stock in a brokerage account. The SEC approved the ETF on Friday, and several other pending ETF proposals could win approval from the Securities and Exchange Commission later this week.

The big question for cryptocurrency traders is how much additional upward price pressure might come from the debut of the new ETF.

Michele Schneider, managing director at MarketGauge, said on CoinDeskTV Tuesday she likes to wait at least a week coming out of the gate with a new stock offering to evaluate whether it’s successful.

“So if we get good volatility, good liquidity and we develop some kind of ongoing interest and we see the coin itself continue to move up, then I think that would probably be enough evidence,” said Schneider.

The ProShares ETF is structured to invest in bitcoin futures contracts traded on the Chicago-based CME, rather than investing in the cryptocurrency directly. So the ETF by itself won’t introduce any new demand for bitcoin. However, traders might buy more bitcoin as they look to hedge against the futures price or take advantage of pricing disparities.

According to data published on ProShares’ website, the ETF started the day with seed capital of $20 million. Dave Nadig, director of research at ETF Trends, tweeted that trading in $BITO appeared “orderly” and “stable” in the early moments after the ETF went live.