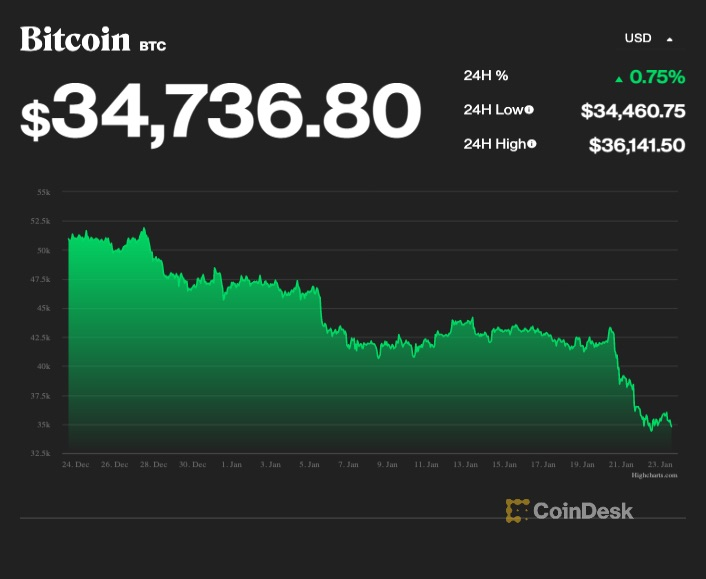 Bitcoin appeared to stabilize on Sunday at around $35,000 after an unusually harsh sell-off, but the largest cryptocurrency was still on track for its worst weekly performance in eight months.

As of press time, bitcoin (BTC) was changing hands just below $35,000, up 1.6% over the past 24 hours. More than $1.5 billion of bitcoin trading positions were liquidated over the past three days due to margin calls, according to the data site Coinglass.

The bitcoin price is down 19% in the past seven days – the cryptocurrency's worst weekly performance since May 2021, when fears of China's renewed crackdown on cryptocurrency trading and mining sent the market reeling, and tweets by Tesla CEO Elon Musk focused public attention on the Bitcoin blockchain network's potential environmental harms.

This time around, crypto traders appear to be pricing in fears that the Federal Reserve will move quickly over the next few months to tighten monetary conditions that have been at historically loose levels since the coronavirus struck the economy in March 2020. The Fed's stimulus – including trillions of dollars of money printing – were widely cited as a reason for bitcoin's price gains in 2020 and 2021, including the ascent to an all-time high price of $69,000 in November.

The latest shakeout left bitcoin down by roughly half from that record price, in a stark reminder of just how volatile cryptocurrency markets can be.

"One of the bullish drivers for crypto over the last two years has been the surplus of pandemic-related fiscal and monetary stimulus globally, and much of that is coming to an end," David Duong, head of institutional research for the big U.S. cryptocurrency exchange Coinbase, wrote Saturday in a report.

The price plunge over the past week looks "emotionally charged," according to Katie Stockton, founder of the analysis firm Fairlead Strategies.

"Because shakeouts are common, we would await confirmation of a breakdown below cloud-based support (~$37.4K) before taking a bearish long-term stance," Stockton wrote.

El Salvador President Nayib Bukele tweeted late Friday that the bitcoin-friendly country took advantage of the price drop to buy 410 BTC for about $15 million, adding that "some guys are selling really cheap." The bitcoin price hasn't been this low since July 2021.