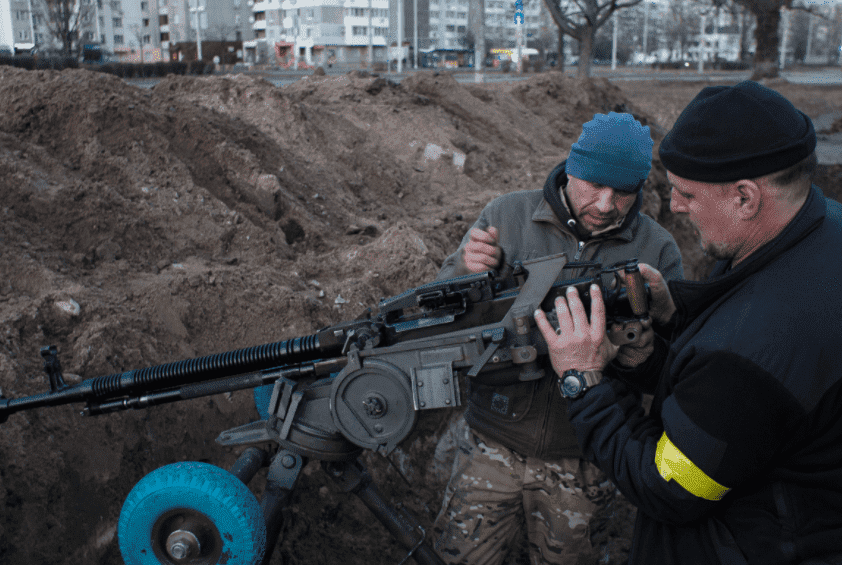 A decentralized autonomous organization (DAO) has formed to raise money for Ukrainian soldiers facing down the Russian army. It seems like cryptocurrency like BTC and ETH finds it’s place in a war.

UkraineDAO, a fundraising effort coordinated by members of the investment group PleasrDAO, the NFT studio Trippy Labs, and the Russian art collective Pussy Riot, has already raised over $3 million in Ethereum-based tokens.

The project is taking cues from other politically-minded fundraiser DAOs, like AssangeDAO (supporting embattled WikiLeaks founder Julian Assange) and ConstitutionDAO, which tried (and failed) to purchase an original copy of the U.S. constitution at auction.

UkraineDAO joins the Ukrainian government itself in asking for cryptocurrency donations to aid the resistance following Russia’s invasion.

Alona Shevchenko, born in Eastern Ukraine and currently based in London, created the Twitter account for UkraineDAO a few days before Russian President Vladimir Putin announced the invasion – “just in case,” she told CoinDesk.

“When I started getting messages from my friends in Ukraine saying that their cities are getting bombed, I messaged my friends from PleasrDAO,” she said. “And then so many amazing people jumped in to help me.”

Shevchenko returned from Thursday’s anti-war protest at 10 Downing Street to a Zoom call organized by PleasrDAO, where she found a team already assembled. The way she put it, UkraineDAO “self-organized super quickly.”

This isn’t Shevchenko’s first crowdfund; she currently works as the operations and community lead for FreeRossDAO, which looks to funnel crypto toward the jailed Silk Road founder Ross Ulbricht.

UkraineDAO plans to use its official war chest (ukrainedao.eth) to support Ukrainian soldiers. Specifically, the group hopes to donate to a Ukrainian organization called Come Back Alive, which was recently banned from the fundraising platform Patreon for violating the site’s terms of service. Come Back Alive has separately raised about $6.9 million from bitcoin donations.

Before the ban, Come Back Alive was accepting U.S. dollar donations for the Ukrainian military; in a letter explaining its decision to block the crowdfund, Patreon quoted sections of the organization’s website, which pointed to “financ[ing] and train[ing] military personnel.”

The letter added that the company has refunded all donations – something that’s not possible in quite the same way with crypto.

“If you put yourself in the shoes of a soldier who is running out of basic weapons, who's not well equipped, who's not properly cared for, who's sacrificing his life, and you're telling us, ‘Oh, sorry, you can't donate to him because it's against our rules’ – to me, it's a crime to do that.”

This weekend, the DAO released a one-of-one NFT of the Ukrainian Flag, which it now plans to purchase (from itself) with the donated funds. It’s all happening through the fractionalized bidding service PartyBid, which allows for group NFT purchases. Donate to the group that ends up winning the auction, and you’ll receive a set of ERC-20 tokens proportionate to what you put in (in this case, $LOVE tokens).

The process is complicated by the fact that $LOVE could have real value; a contribution to UkraineDAO is as much a charitable donation as an investment in $LOVE tokens, which can be bought and sold on decentralized exchanges like Uniswap.

It’s also possible that the PartyBid could lose the auction for the flag NFT, if a whale swoops in at the last moment. In that case, the funds would still go to UkraineDAO, but PartyBid contributors would need to reclaim their donations from the site: Come Back Alive would theoretically still get the money, but the funds in the group bid would be rendered meaningless. It’s a competitive donation scheme, rather than a cumulative one.

The DAO is also giving money to the NGO Proliska, and has suggested it might give to the Red Cross. But the way Shevchenko sees it, the contributions are best used militarily.

“All our help, realistically, needs to be thrown for the army,” she said. “If you don't stand up for our army right now, we will have no civilians to help.”