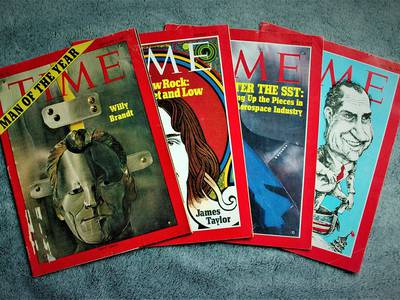 TIME magazine joined the digital token craze on Thursday and it did not go well. The influential media launched an NFT collection called TIMEPieces, including 4,676 works from 40 artists, each priced at 0.1ETH, or around 310 USD. The sale clogged the Ethereum blockchain, sending transaction fees skyrocketing.

When the sale opened to the public earlier today, all 4,676 were gone in minutes.

But the sale also clogged the Ethereum blockchain, sending fees to astronomical highs – buyers spent almost four times as much on transaction fees as they did on the NFTs themselves, according to a datatracker from an analyst called Banterlytics. One address paid $70,000 for 10 of TIME’s NFTs.

The plan for the launch was simple enough – the NFTs would go on sale at a set time, and prospective buyers would need to have their finger on the trigger.

Even outside of crypto, this is a broken system. High-profile sales for concert tickets and sneaker drops are already dominated by automated “bots” that can snap up an entire supply in seconds. The high-rollers behind the bots can take advantage by charging unreasonable prices for assets on the secondary market (it’s also known as “scalping”).

That’s what happened here, too. According to the blockchain explorer Etherscan, the 100 addresses with the most NFTs now own around 24% of the total supply.

The Ethereum blockchain compounds the problem with something called a “priority fee.” These are additional fees users can pay to incentivize miners to accept their transactions first, before other users who haven’t put up as much cash. When too many people try to use the network at once, it creates a bottleneck; users who can afford to pay those exorbitant fees can effectively cut the line.

A caveat is that because the NFTs in TIME’s collection all just point to a red TIME logo, rather than a digital artwork, buyers still don’t know what they’ve actually bought. TIME president Keith Grossman said the individual works attached to the NFTs would be revealed today at 6pm Eastern. Users will have to use the “refresh metadata” button on the digital marketplace OpenSea to find out what they own.

Grossman has become increasingly embedded in crypto over the past year; TIME began accepting crypto payments for subscriptions this past spring, and released a set of digital magazine covers as NFTs. TIME also has bitcoin on its balance sheet, thanks to a deal with the crypto investment firm Grayscale. Grossman told CoinDesk that today’s high fees and inequitable distribution of NFTs were “not ideal.”“I think we learned a lot about gas in general,” he said. “There are things that you can’t control for in the gas space.”

Grossman explained that his decision to cap the number of NFTs per address (each buyer could only mint ten, though a single buyer could mint from multiple wallets) was part of an effort to deter bots. At publication time, the lowest listed price for a TIMEPiece was hovering around 3 ETH, or around $9,500. Grossman maintained that he was proud of today’s launch, in spite of the chaos. “We’re going to make sure that the next time that we do this, everything that we have seen that went wrong or that didn’t go as we planned, is fixed,” he said.