This week Polygon (MATIC) announced the open source release of their zkEVM scaling solution for Ethereum, with a mainnet release scheduled for 2023, is this new sidechain setting up MATIC for the bullrun of a lifetime or is it not all that?

One of the most exciting developments in web3 in recent times with the rockstar dev team from India, Polygon has been described as the ‘curates egg’ of blockchains. With an ecosystem closely integrated with all the major ETH Dapps like Opensea and Uniswap, it has become the go-to ETH sidechain alternative to Binance Smart Chain for traders looking for quick and cheap transactions. But in a stunning own goal, a tweet from the Polygon co-founder appeared to pour cold water on what seemed like bullish news.

What is Polygon’s MATIC Sidechain? 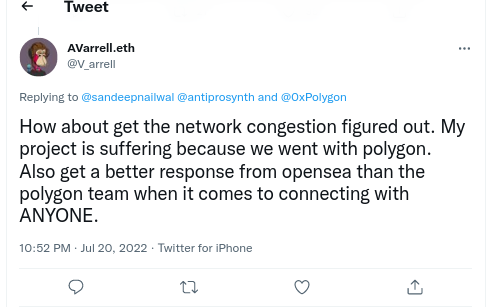 That may be the case but it hasn’t stopped MATIC from equalling Binance Smart Chain in daily transactions.

Announced on Twitter by Polygon founder Sandeep Nailwal, the release of the open source code of Polygon zkEVM claims to be the first ever “EVM equivalent zero knowledge Layer 2 blockchain”.

Zero Knowledge sidechains have been around for a while, with projects like Loopring, Zero knowledge or “ZK” rollups using complex mathematics and computer science – rather than a dispute period (As in the case of optimistic rollups) – to guarantee that transactions that get bundled up and posted to a layer 1 network are “true.” They do this by constructing so-called “zk-SNARKs” – a kind of cryptographic message that “proves” a statement is true without requiring you to walk through it yourself.

The main innovation with Polygons zk rollup solution is Plonky2 a SNARK formula that is 100X faster than existing solutions.  It is also compatible with EVM, meaning any Dapps running on the sidechain will be able to use existing EVM compatible code.

Polygon zkEVM is the first full implementation of this EVM compatible ZK technology with Plonky2 that is open source.

But what does this mean for the price of MATIC? Will MATIC be used in this new sidechain? Well, it’s not so simple. Because the ZK rollups need to be validated on the main Ethereum L1, the gas fees for this new blockchain will need to be paid for in bridged Ethereum.

Polygon founder Nailwal let slip on Twitter, much to the consternation of MATIC holders, that the MATIC token will only be used for “Staking” on the new network and would not be consumed as fees for transactions. In a Now Deleted Tweet that put a dampener on the bullish news, Sandeep Nailwal explained that gas fees would need to be paid in ETH:

This tweet (Now deleted) seems to suggest that the news is not quite as bullish for MATIC token as it first seemed.

The tech may be impressive, but competitors like AVAX, whose founder Emin Gun Sirer trades jibes with the MATIC community on a regular basis, are sure to jump on this revelation in an effort to boost their own L1 solutions.

Despite the twitter peanut gallery, Polygon has shown that they are leaders in blockchain development that cannot be ignored, but what that means for the price of MATIC token is still to be decided. For business enquiries, contact us at Business@mail.fameex.info