News
What Exactly is an Ethereum Virtual Machine (EVM) and How Does It Function?

What Exactly is an Ethereum Virtual Machine (EVM) and How Does It Function?

EVM forms the backbone of the Ethereum blockchain, providing developers with a runtime environment for building DApps and other applications.

The second-largest cryptocurrency by market capitalization, Ether is popular with cryptocurrency investors due to its native ETH token. However, the native programming language and Ethereum Virtual Machine (EVM) have contributed to recognition from the developer community. In fact, the Ethereum blockchain continues to attract decentralized application (DApp) developers due to its flexibility, the large range of developer tools available, and the platform's wide user base. The EVM, which is at the heart of the blockchain's design, is the software that executes its application code, or "smart contracts," as they are known, by providing a run-time environment for them on top of the Ethereum network. Furthermore, the EVM is Turing-complete, which means it can run any program written in any programming language, allowing developers to quickly design unique smart contracts and DApps for the developing Web3 area. Aside from these critical functions, the EVM has access to all network nodes, executes smart contracts, and basically manages all transactions on the Ethereum blockchain, making it one of the most powerful virtual computers in existence today.

The Ethereum network, which was conceptualized in 2013 by programmer Vitalik Buterin, owes its spectacular success as the preferred blockchain for DApp developers to the Ethereum Virtual Machine (EVM), which was created by Gavin Wood during his employment at Ethereum. EVM is a customized state machine written in C++ and utilizing the LLVM Project compiler that works constantly and whose immutable actions define the state of each block in the Ethereum blockchain.

To understand what an Ethereum Virtual Machine does, consider each of the various functions it performs to ensure the smooth operation of the Ethereum network. The EVM generates deterministic output that follows a mathematical function in the most basic sense for each input that it receives. 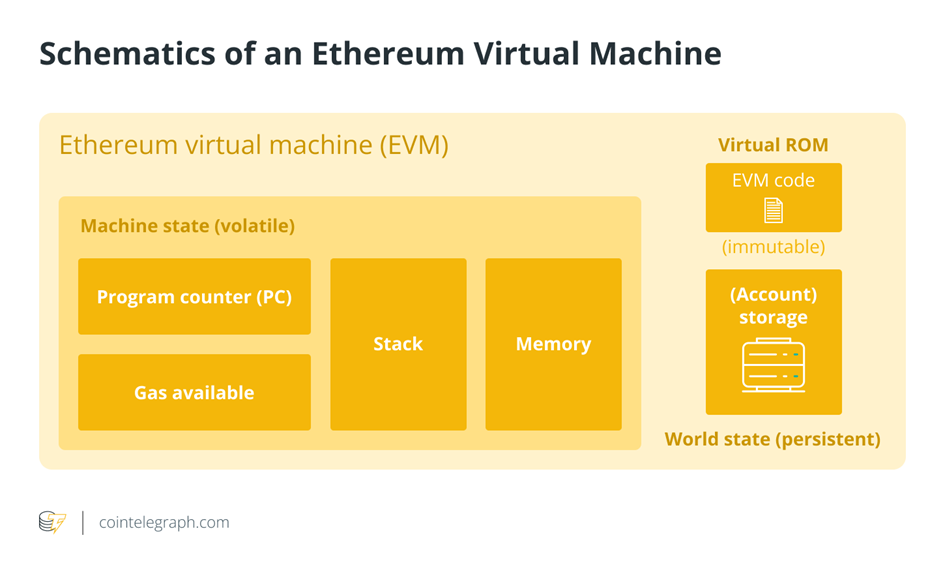 In reality, the EVM is in charge of maintaining a degree of abstraction between thousands of Ethereum nodes and the executing code, operating as a function that produces consistent outcomes without disclosing too much information to clients or nodes.

The EVM has consistently powered all apps operating on the Ethereum network, with no major outages observed. The EVM serves as the overall program that runs smaller executable programs known as smart contracts in Ethereum, while also allowing developers to build these smart contracts in several programming languages like as Solidity, Vyper, Python, and Yul, among others. The Ethereum blockchain has generated hundreds of DApps in the decentralized finance (DeFi) and non-fungible token (NFT) areas because of the freedom provided by the EVM.

Pros and Cons of the Ethereum Virtual Machine (EVM)

Because of how the EVM works, developers may run code without worrying about its influence on the rest of the network or the danger of it interfering with data or personal files stored on any of the node computers. Furthermore, they can operate complicated smart contracts with distributed consensus across several computer environments. Because the EVM code is the same across all nodes, the failure of a single node has no negative impact on the operation of the DApp or smart contract.

Despite the many benefits provided by the EVM, there are several drawbacks that developers and entrepreneurs developing on Ethereum should be aware of. The high transaction fees or gas costs involved with running a smart contract on the Ethereum network are the most significant of these. These fees, which are paid in ETH, vary according to the complexity of the contract and network congestion at the time of execution, making it critical for developers and entrepreneurs to price their services accordingly. Furthermore, because Solidity is the most popular language for coding on the EVM, developers must have sufficient experience with it as well as a modicum of technical expertise to create efficient smart contracts using it.

Disclaimer: The information provided in this section doesn't include any investment tips or FAMEEX's official position.