Ethereum was first described in a 2013 whitepaper by Vitalik Buterin. Buterin, along with other co-founders, secured funding for the project in an online public crowd sale in the summer of 2014. The project team managed to raise $18.3 million in Bitcoin, and Ethereum’s price in the Initial Coin Offering (ICO) was $0.311, with over 60 million Ether sold. Taking Ethereum’s price now, this puts the return on investment (ROI) at an annualized rate of over 270%, essentially almost quadrupling your investment every year since the summer of 2014.

Ethereum’s own purported goal is to become a global platform for decentralized applications, allowing users from all over the world to write and run software that is resistant to censorship, downtime and fraud.

Ethereum is a blockchain platform with its own cryptocurrency, called Ether (ETH) or Ethereum, and its own programming language, called Solidity.

As a cryptocurrency, Ethereum is second in market value only to Bitcoin, as of May 2021.

Ethereum is an open-source blockchain-based platform that creates and shares business, financial services, and entertainment applications.

Ethereum users pay fees to use dApps. The fees are called "gas" because they vary depending on the amount of computational power required. 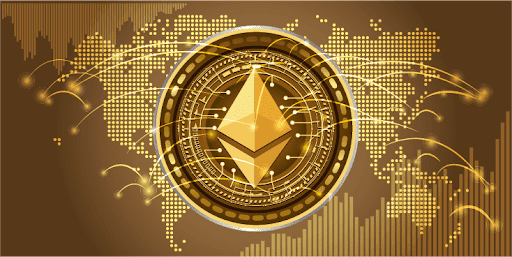 Ethereum was created to enable developers to build and publish smart contracts and distributed applications (dApps) that can be used without the risks of downtime, fraud, or interference from a third party.

Ethereum describes itself as "the world's programmable blockchain." It distinguishes itself from Bitcoin as a programmable network that serves as a marketplace for financial services, games, and apps, all of which can be paid for in Ether cryptocurrency and are safe from fraud, theft, or censorship.

Ethereum was launched in July 2015 by a small group of blockchain enthusiasts. They included Joe Lubin, founder of ConsenSys, a blockchain applications developer that uses the Ethereum network. Another co-founder, Vitalik Buterin, is credited with originating the Ethereum concept and now serves as its CEO and public face. Buterin is sometimes described as the world's youngest crypto billionaire. (He was born in 1994.)

The Ether cryptocurrency was designed to be used within the Ethereum network. However, like Bitcoin, Ether is now an accepted form of payment by some merchants and service vendors. Overstock, Shopify, and CheapAir are among the online sites that accept Ether as payment.

The founders of Ethereum were among the first to consider the potential of blockchain technology for uses beyond the secure trading of virtual currency. Its ETH cryptocurrency was created primarily as a medium of payment for apps built on its platform.

Its invulnerability to hackers and other snoopers has opened up possibilities for the storage of private information from healthcare records to voting systems. Its reliance on cryptocurrency opened up opportunities for programmers to create and market games and business applications on the network.

A blockchain may be invulnerable to hacker attacks, but it's not for lack of trying. In 2016, a malicious actor stole more than $50 million worth of Ether that had been raised for a project called The DAO, a set of smart contracts created by a third party and originating from

Ethereum's software platform. The successful raid was blamed on a third-party developer.

The Ethereum community opted to reverse the theft by creating a "hard fork," invalidating the existing blockchain and creating a second

Ethereum blockchain. The original is known as Ethereum Classic.

As of May 2021, Ethereum was the second-largest virtual currency on the market, behind only Bitcoin.The number of ETHs in circulation crossed the 100 million mark back in 2018.

Unlike Bitcoin, there is no limit to the number of ETHs that can be created.

Ethereum is currently undergoing a long-awaited upgrade known as Ethereum 2.0, which is intended to allow the network to scale up while addressing congestion problems that have slowed it down in the past.

(In 2017, a game called CryptoKitties single-handedly slowed down transactions on the platform.)
Ethereum has wider ambitions than Bitcoin. It wants to be a platform for all kinds of applications that can store information safely.

Ethereum faces the same criticisms that all cryptocurrency platforms face:

Prices of all cryptocurrencies, including Ether, tend to mirror bitcoin price action. This has been evident for years and is front and center at present. For example, in 2017, bitcoin's value seesawed between about $900 and about $20,000. In April 2021, bitcoin hit a high of around $63k, and hovering around $30k in July 2021.As such, cryptocurrencies remain highly speculative and subject to both bullish and bearish periods.

Each of these networks is eating up a vast amount of energy. Cryptocurrency miners, in particular, are devoting a huge amount of computing power to the process of validating transactions. One of China's reasons for cracking down on cryptocurrency there is the fossil fuel energy drain caused by large-scale crypto coin mining operations.

Ethereum also has faced criticism over its fees. That may change with the introduction of Ethereum 2.0.

Ethereum, like any blockchain, is a database of information that is designed to be unhackable. Ether, or ETH, is the cryptocurrency used to complete transactions on the blockchain.

Unlike in a traditional database, information in a blockchain is organized as a chronological "chain" made up of "blocks" of data. For instance, every transaction using an Ether coin must be verified and recorded as an additional block on that coin's unique blockchain. This process of recording every transaction in a sequence is the reason that a blockchain is often compared to a ledger.

The Ethereum blockchain stores more than transaction records for Ether currency. It allows software developers to create games and business applications, called dApps, and market them to users. Those users want to take advantage of the relative lack of risks that come with storing sensitive information on the World Wide Web.

What Is ETH Trading?

Investors use any of a number of cyber currency trading platforms to buy and sell Ether, or ETH. The current choices include Fameex and so on. Investing apps like Robinhood and Gemini also allow cryptocurrency trading.

As mentioned previously, crypto prices are extremely volatile, and the people who trade them are trying to capitalize on that volatility. The value of one ETH was trending between $1,800 and $2300 in July 2021. It had been above $4,000 in mid-May. It was about $231 a year before.

Is Ethereum Better Than Bitcoin?

In other words, Ethereum has wider ambitions. It wants to be a platform for all kinds of applications that can store information safely.

Despite their differences, the two are the creators of virtual currencies that have become rivals in the investing world. And virtual currencies are just that: They are coins that have no physical existence but are represented by a string of codes that can be exchanged at a price agreed upon by a buyer and a seller.

How Does Ethereum Make Money?

Users pay fees to use dApps on the Ethereum platform. These fees are called "gas" because they vary depending on the amount of computational power used.

The median fee for gas was above $10 per transaction in early 2021, according to the Ethereum Gas Report.