The network is based on a novel scaling solution called MoreViable Plasma, which uses a sidechain architecture to group several transactions off-chain into a batch, which can then be verified as a single transaction on the Ethereum root chain. According to OMG Network, this technology has the potential to scale Ethereum to thousands of transactions per second (TPS) — instead of the 10 to 14 tps Ethereum 1.0 is currently capable of.

The network is powered by the OMG utility token, which can be used as one of the payment methods for fees on the OMG Network, and will eventually be stakable — helping to secure the network in return for rewards. 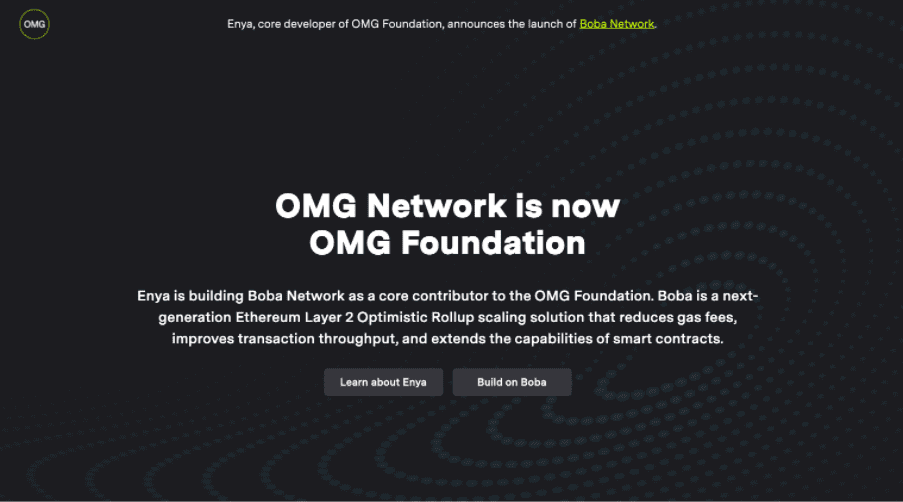 Launched in 2017, OmiseGo boasts to be the quickest and most affordable way to transfer Ethereum and ERC-20 tokens globally. After Genesis Block Ventures’s taking over in late 2020, OmiseGo then got a new name OMG Network. In 2021 it announced a new Layer 2 product Boba Network created by blockchain developer Enya, in collaboration with OMG.

What is the OmiseGo Network?

Ethereum Layer-2 solution OMG is a scaling protocol that aims at achieving higher transaction volumes at a lower cost while leveraging the security guarantees of the Ethereum network. You can imagine OMG as a network built on the Ethereum plasma framework and makes it more secure and practical.

Interestingly, OMG is a new name created from the rebranding event in 2020. But, to know what OMG truly is, we should go back to the beginning.

OmiseGo was a project started by the company Omise which is an online payment gateway based in Thailand that was founded in 2013. In 2017, OMG Network was created and its ICO raised $25 million dollars. Partnering with Alipay and McDonald’s, OMG attracted more interested investors.

Then OMG underwent a couple of rebranding events, including the latest in 2021. OMG Network is widely thought to be dead since the head of the project is now called OMG Foundation and OMG announced its partnership with Enya, provider of secure multiparty computation services to build Boba Network. Boba is another Ethereum L2 optimistic rollup scaling solution that reduces gas fees. Therefore, OMG Network is widely recognized as an obsolete project and Boba Network inherited the OMG Network community.

Since the change in governance, OMG holders received a BOBA airdrop in late 2021 and all OMG tokens will be replaced by BOBA tokens at the rate of 1:1.

Launched through an ICO in 2017, OmiseGo raised around $25 million dollars. The native token of the OMG Network was used as a staking token that can fund the development of the project. Also, OMG could be used for paying fees on the network as well as by validators running network nodes.

OMG began trading at $0.43 in July 2017 and its value is slightly above $4 with a market capitalization of over $605 million. However, as mentioned earlier, the takeover by Boba has fueled anxiety vibes among the investors, thinking the network is obsolete but still some think a revival of the project might be possible.

PreviousAzuki: The Fastest Growing NFTNextUSDT is a stablecoin (stable-value cryptocurrency) that mirrors the price of the U.S. dollar.
Market
OMG+2.18%
1.452 USDTGo trade
Other articles

Mothers’s Day is Coming, Why Not Cryptos?
frankfrank the NFT, What is it?
What is Cryptocurrency?
What is Blockchain?
PAXG (PAX Gold)
Binance coin (BNB)
MultiversX (EGLD)
Solar (SXP)
Alien Worlds (TLM)
Avalanche (AVAX)