Visit our Support Center. It's the easiest way to access all the crypto information needed.

How to Use a Trailing Stop Order

Solve your problems and learn more about related topics via our tutorial video: How to Use a Trailing Stop Order?

Interested in more details? Read the whole article below!

1. What is a trailing stop order?

A trailing stop order allows traders to place a pre-set order at a specific percentage away from the market price when the market swings.

a) Available balance in spot wallet ≥ order amount, the order would be executed at market price.

c) Available balance in spot wallet ＜ the minimum order amount in the market, then the order would be canceled by the system.

(1) Trigger Price: The trailing order would be triggered if the last traded price hits the “Trigger Price.”

(3) Total Purchasing Amount (Total): when purchasing, fulfilling the “trigger condition” and “callback rate”, then the total amount of token would be purchased at the market price.

(4) Selling Amount: when selling, it has to fulfil both “trigger condition” and “callback rate”, then your token would be sold at market price.

In order to prevent the user places the order accidentally to have a loss which can be avoided, FAMEEX limits the order with the following conditions:

a. Trigger price of the trailing stop order cannot be larger than or equal to the last traded price when purchasing.

b. When selling, the Trigger price of the trailing order cannot be smaller than or equal to the last traded price.

3.Take BTC/USDT as an example

The price of BTC at 8000 USDT, the trader expects that the price of BTC is going to fall. When it falls to a certain price level, it will bounce back. In this case, this trader could use our trailing stop order to purchase BTC at market price when the market starts to bounce back from the retracement. 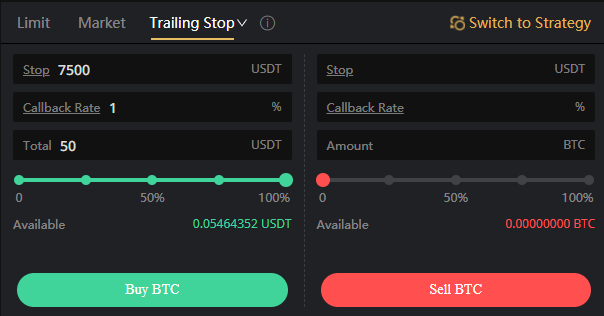 The trader expects the price to fall, and he sets the trailing purchasing order at the stop (trigger price) at 7500 USDT; furthermore, the callback rate reaches 1% and therefore the purchasing amount is 50 USDT. If the price of BTC falls from 8000 USDT, and the lowest price hits 7400 USDT, which means 7400 USDT ≤ Trigger Price (7500 USDT), the condition is fulfilled. After that, the price of BTC bounces back to 7575 USDT and the callback rate hits 1% (7575-7500)/7500=1%, the callback rate condition is also fulfilled. The trailing order will be triggered, and the order price will be the market price. The purchasing amount will be 50 USDT.

The trader expects a bounce back in the price of BTC after a retracement happens when BTC reaches a high price level. Traders can use our trailing order to sell his/her BTC when the price bounces back to market price.

When BTC rises from 8000 USDT to the highest point at 8600 USDT, then 8600 USDT≥Trigger Price(8500), this condition has been fulfilled. When the price of BTC falls from the highest point at 8600 to 8514 USDT, which means 1% of retracement, then the callback rate is 1%, the trailing order will be fully triggered, and the order would be executed to sell 0.5BTC at the market price.