“Bitcoin is great as a form of digital money, but its scripting language is too weak for any kind of serious advanced applications to be built on top.”

Selected as one of Time magazine’s 100 influential figures in 2021, 27-year-old Vitalik Buterin wrote Ethereum White Paper when he’s only 19!

Born in a small town in Russia and raised in Toronto, Buteri immigrated to Canada with family before turning six. He has been considered a gifted kid since little but he quit Computer Science studies at the University of Waterloo back in 2014 and has focused on the decentralized world since then.

Once a Bitcoin supporter, Buterin wrote blogs about Bitcoin and even co-founded Bitcoin Magazine in 2011 with Mihai Mihai who later co-founded Ethereum with Buterin. Like many teenagers, Buterin was attracted to online games as well and once confessed the childhood trauma with World of Warcraft that was among the reasons behind his affection for decentralization.

“I cried myself to sleep, and on that day I realized what horrors centralized services can bring.”

Buterin mentioned the incident on his about me page online that how the game developer Blizzard’s removing the damage component from his beloved warlock’s Siphon Life spell has been a turning point of life. 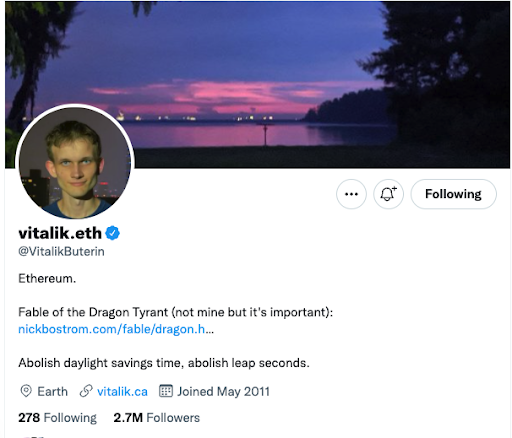 In 2013, Beterin published the white paper of Ethereum, the open-sourced blockchain featuring smart contracts that rocked the crypto world later on. With the help of 7 other co-founders, Buterin launched Ethereum in 2015 but this was one of the most regrettable things to him according to a Twitter AMA session in September. Some of the cofounders then develop their own cryptocurrencies, including top ten crypto Cardano and Polkadot.

Now the Ethereum network is gearing up for ETH 2.0, the biggest upgrade since 2015, which was planned to launch this year originally. The Ethereum foundation announced ETH 2.0 may commence by the second quarter of 2022. The new version will transition to a PoS model and finally make mining obsolete.