News
Adoption of Cryptocurrencies in 2022 - What Developments Spurred Growth?

Adoption of Cryptocurrencies in 2022 - What Developments Spurred Growth?

While a number of insolvencies and everyday volatility plagued the cryptocurrency market in 2022, adoption seems to have maintained its pace on a worldwide scale.

It's no secret that for the whole year 2022, the cryptocurrency market was under negative pressure. Nevertheless, despite all the turbulence and confusion, a number of encouraging news items have surfaced, particularly those pertaining to the widespread use of digital assets and generally crypto-related technology.

Here are some significant adoption-related events from 2022 that helped propel the market in the previous year.

The Total Amount of Staked Ether Keeps Increasing
The total amount of Ether locked within the Ethereum ecosystem has been continuously increasing through 2022. The quantity of staked ETH increased from slightly over 9 million to over 13 million between February and June. The increase reached a plateau between June and September, as shown in the graph below, before picking up momentum again around mid-September, just in time for Ethereum's much-anticipated switch to proof-of-stake. Staking, as used in the context of the Ethereum network, is the act of putting 32 ETH into the network in order to get validator privileges and the opportunity to earn more ETH. Users must carry out a number of tasks as validators, including storing data, processing transactions, and adding new blocks to the blockchain, in order to help safeguard the network for all users. 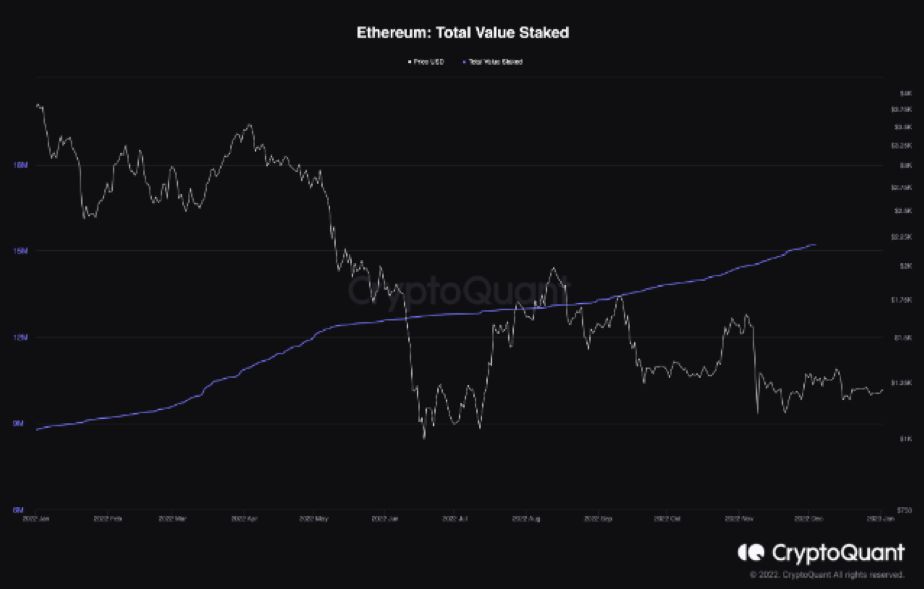 
Despite Facing Obstacles, Polygon Collects 200 Million Addresses by 2022
Although the cryptocurrency industry has been wrapped in a cloud of financial uncertainty since the end of 2021, Polygon, a layer-2 scaling solution that runs alongside the Ethereum blockchain and enables quick transactions at low costs, continued to see significant growth in 2022. The network's total number of unique addresses has now exceeded 200 million, hitting an all-time high of 205,420,908 on December 31.

Additionally, between December 1 and December 31, the number of unique addresses in the Polygon ecosystem increased by an astounding 8,783,568. This indicates that during the last month of 2022 alone, an average of 283,340 new network addresses associated with Polygon were created every day. It is also important to note that the number of transactions occurring within the network has remained constant at or near 3 million. Last but not least, the proof-of-stake project has made the final testnet, an enhanced version of its zero-knowledge Ethereum Virtual Machine, available.

Major Businesses Keep Entering the Web3 Space
A number of high-end fashion and luxury businesses have continued to show an interest in the non-fungible token (NFT) market and the metaverse sector. For instance, the well-known watchmaker Rolex, which has a presence all over the world, applied for several NFT-related trademarks in addition to one for a cryptocurrency exchange in October. Reebok, Nike, and Adidas, three well-known athletic goods behemoths, also took similar actions.

Nike introduced the Swoosh metaverse project, a Web3-enabled marketplace where users may purchase and trade virtual goods. According to reports, the platform will focus on community development while hosting the introduction of the business's first virtual collection, which will include footwear, clothes, and accessories, probably in January 2023. The network will only support cash transactions at first, not digital currencies, and all transactions will be logged on the Polygon blockchain.

Last year, Adidas unveiled a fresh range of virtual clothing along with a picture-for-proof dressing tool that let avatars from compatible partner collections, such as Bored Ape Yacht Club, be decked out in their clothing. Reebok submitted many trademark applications in the US for a variety of virtual gear, including shoes, hats, and sporting goods.

BMW, a premium automaker, has declared its decision to join the metaverse war by submitting an application for a trademark for its logo, which would be used in connection with its planned virtual automobiles, online stores, and other associated services.

Disclaimer: Neither FAMEEX's formal position nor the material presented in this part serve as a financial tip.