Dogecoin Emerged as the Underdog - Surviving the 2022 Bloodbath Better than Most
https://www.fameex.com/en-US/news/dogecoin-dmerged-as-the-underdog-surviving-the-2022-bloodbath-better-than-most
The price of Dogecoin has fared far better than most of the main assets on the market throughout the terrible crypto collapse of 2022. With a decrease of "only" 58% this year, DOGE is the third-best performance among the top ten, after only XRP and BNB, which had drops of 57.2% and 53%, respectively.

Fidelity Wants to Give Investment Advice in the Metaverse Say Trademark Filings
https://decrypt.co/117990/fidelity-wants-give-investment-advice-metaverse-new-patent-filings
The asset management firm Fidelity Investments has filed three new trademark applications covering a host of Web3 products and services, including an online marketplace for buyers and sellers of digital media, referral services for investment advice and financial planning in the metaverse, virtual real estate investing, and crypto trading and exchange services.

Three Countries Account for Nearly Two-Thirds of Africa's Crypto Holders — Study
https://news.bitcoin.com/three-countries-account-for-nearly-two-thirds-of-africas-crypto-holders-study/
The latest study undertaken by the Moroccan think tank Policy Center for the New South (PCNS) suggests that Nigeria has by far the largest number of cryptocurrency holders (40.5%) among the 33 African countries that were surveyed. The study findings also show South Africa as the next highest-ranked African country with an estimated 7.71 million cryptocurrency holders. Kenya’s estimated 6 million crypto holders mean it is the third highest-ranked African country.

The Fear & Greed index climbed slightly to 28, still below 30. The number has been around 25 most of the time in the last 4 months, but the number has been near 28 in the last 30 days, showing that the investors’ confidence is yet to be recovered. But on the other hand, the market has been relatively stable, instead of slipping further.

After TrendForce having lowered the production of iPhone 14 in 2022, Apple stock fell by more than 3%, the lowest record in the past 18 months. Its market value is down by 1 trillion dollars. The pandemic outbreak in China has negative influence on the demand for crude oil, so the energy stock has been in a low price zone lately. Recently, North America has been haunted by winter storm, the airline stocks are also in a low price zone.

The austerity policy is impacting the real estate market. According to the latest statistics published by the NAR on Wednesday, America's housing on sell in November was down by 4%, significantly higher than the 0.8% expected by the market. The number has been decreasing in the past 6 months. 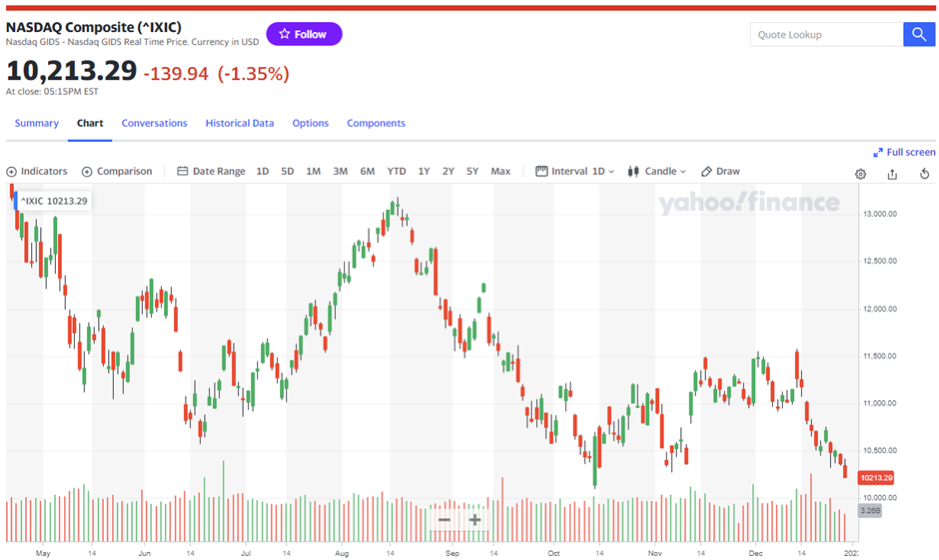 Judging from the 4-hour timeline, the BTC price has been down for two consecutive days, breaking the support at 16600. The order of moving average lines shows that the short will dominate the market. However, the market can be quite unstable against the background of low fluctuation plus the coming New Year Festival.