Fiji elects pro-Bitcoin prime minister Sitiveni Rabuka
https://cointelegraph.com/news/fiji-elects-pro-bitcoin-prime-minister-sitiveni-rabuka
Sitiveni Rabuka, the newly elected pro-Bitcoin Prime Minister has taken office in the Pacific Islands of Fiji. Lord Fusitu’a, a Tongan noble and a former member of the Tongan parliament, took to Twitter to stated that he had explained to Rabuka step by step “how Fiji can do Bitcoin legal tender like Tonga,” and there could be two “Legal Tender Bills for the Pacific in 2023.”

MicroStrategy Sells Off Bitcoin for First Time—Then Buys Even More
https://decrypt.co/118061/microstrategy-sells-off-bitcoin-first-time-buys-even-more
MicroStrategy sold 704 BTC for about $11.8 million on December 22, the company wrote in a filing with the United States Securities and Exchange Commission (SEC)—a move that may benefit the company in terms of tax liabilities, given how much value BTC has lost since MicroStrategy first began acquiring the cryptocurrency in 2020. However, the firm then turned around and purchased 810 BTC for about $13.6 million on December 24.

The Crypto Community is Divided Over the Bitcoin Purchase of MicroStrategy
https://www.fameex.com/en-US/news/the-crypto-community-is-divided-over-the-bitcoin-purchase-of-microstrategy
Many people applauded the decision, while others voiced concerns about the possible drawbacks of having a single institution retain a large amount of Bitcoin. Read more by entering the link above.

The Fear & Greed index stayed at 28, still below 30. The number has been around 25 most of the time in the last 4 months, but the number has been near 28 in the last 30 days, showing that the investors’ confidence is yet to be recovered. But on the other hand, the market has been relatively stable, instead of slipping further.

The 2022 is about to end, investors tend to be conservative. The US stock hadn’t seen much transaction on Thursday (December 29th). The prices of tech stock went down but was still supported by the buyers. The main stock indexes increased at the end of the trading day. The four major indexes all turned red.

In terms of statistics last week, the US Department of Labor published that 225 thousand people applied for unemployment compensation after the policy adjustment. The number is in line with the market expectation, but was still near the lowest record. It’s revealed that though the FED has been taking measures to decrease the demand, the employment market has still been flexible this year.

In terms of geopolitics, the Russian-Ukraine war shows no sign to stop. The large-scale air raid launched by Russia to Ukraine on Thursday targeted major cities, including the capital Kiev and the Lviv, a city in the western Ukraine near Poland. Information from the US indicates that it’s considering offering Ukraine Bradley Infantry Fighting Vehicle. 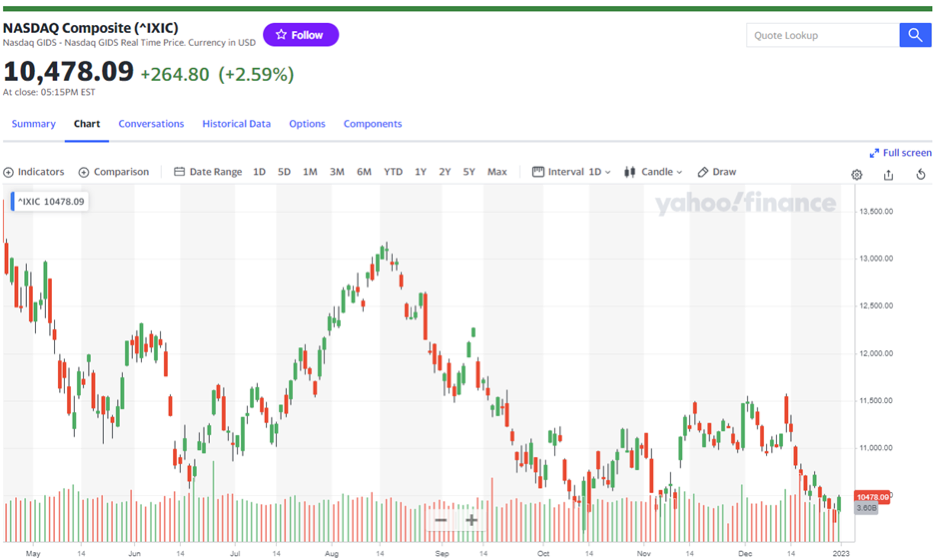 Judging from the 4-hour timeline, the BTC price is rebounding. The support is 16500. But the rebound momentum of the long side is pretty weak. Plus the fact and the tendency showed by the moving averages that the short is and will dominate the market, in the short-term, the price change is unpredictable. The market will be quite unstable against the background of the low fluctuation and the coming New Year Festival.