Alejandra Guajardo, Miss Universe 71's representative for El Salvador, donned a Bitcoin-themed gown during the contest's National Costume Show on Wednesday night. "You don't need a sash to stroll around dressed as currency, like El Salvador," remarked the pageant announcer. 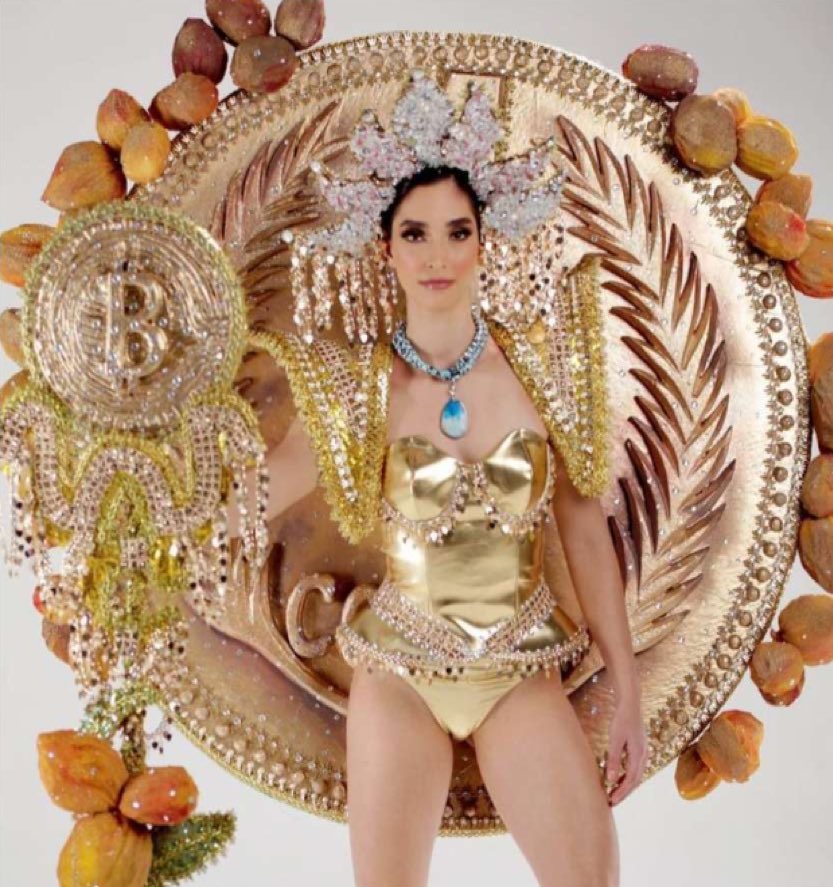 Francisco Guerrero, a plastic artist, focused particularly on the reigning monarch of digital assets while creating the money ensemble. Guajardo carried a colón, one of the formerly recognized currencies in the nation, embellished with cocoa beans, strapped on her back, and she held a staff bearing the Bitcoin emblem at its point.

The pageant announcer explained that "this appearance symbolizes El Salvador's history of money." "Cocoa was used for a very long period, followed by the colon, until the U.S. dollar supplanted it." Of course, Bitcoin followed.

In 2021, El Salvador became the first nation in the world to recognize Bitcoin as legal money. The international community, particularly the International Monetary Fund and World Bank, reacted to the decision generally with skepticism and anxiety. Additionally, American lawmakers expressed concern that El Salvador's Bitcoin agenda may undercut U.S. sanctions measures and lead to financial instability in the country.

Despite the fact that Bitcoin's price has dropped by more than 50% since the law went into force, El Salvador's President Nayib Bukele has continued to be a staunch supporter of the virtual currency. Although it's not obvious if he played any direct part in Guajardo's selection of clothing for the pageant, he has been actively involved in supporting a good deal of BTC adoption projects.

The announcer for the pageant noted during the broadcast, "You don't need a sash to go about dressed like El Salvador." The model's outfit at the previous competition was intended to demand justice for the ladies who were killed in El Salvador. In 2022, Bukele started mass arresting individuals in an effort to stem the country's rising crime rate. Since then, the murder rate in El Salvador has decreased by 56%, according to data provided by the Bukele administration.

El Salvador, meanwhile, passed its Digital Securities Law on Wednesday, establishing a foundation for stringent consumer protections in the wider cryptocurrency market. The country's National Bitcoin Office describes this as "indicating that we are open for business to all those who desire to create the future with us on Bitcoin."

Also, it lets El Salvador issue its $1 billion in Volcano Bonds, the income of which will be utilized to invest in Bitcoin and establish a "Bitcoin City" powered by geothermal energy.

Disclaimer: Neither the content in this section nor any investment tip represents the official viewpoint of FAMEEX.