Ethereum co-founder Vitalik Buterin has updated the project roadmap to include a new phase called “The Scourge.”

The update shared on Twitter improved the previous 5-phase Ethereum roadmap, which explains how the network will achieve scalability.

Buterin explained that the new roadmap brings more concrete milestones to every category and a “More explicit role for quantum-proofness as a necessary component of the “endgame” protocol.”

The update has six phases, the Merge, the Surge, the Scourge, the Verge, The Purge, and the Splurge. Ethereum initiated the Merge in September with the transition to the Proof-of-Stake consensus mechanism. But the second stage of the Merge will be about single-slot finality. 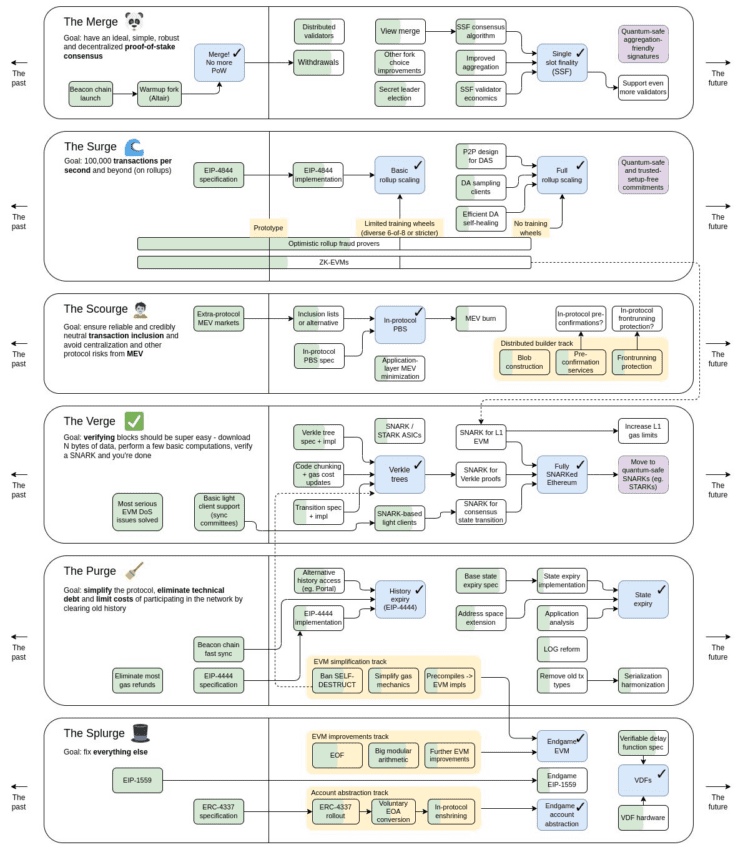 The next phase is the Surge, where scalability solutions are expected to start. With the Surge, the goal is to improve network performance on Ethereum. Currently, the network process is between 10 and 20 TPS, but the Surge, when completed, could increase that to 100,000.

The Scourge, an addition to the roadmap, comes next, and Buterin explained that it would “ensure reliable and fair, credibly neutral transaction inclusion and solve MEV issues.”

Another update is to the fourth phase, the Verge. It will now focus on verification and not just “Verkle trees.” Buterin explained that the endgame of the phase is fully SNARKed Ethereum.

SNARK means “Succinct Non-Interactive Argument of Knowledge.” When completed, it would improve anonymity on the network while still allowing transactions to go through and be traceable.

There have been mixed reactions to the update. Some BTC maxis used the new update as an opportunity to say Bitcoin was better and ETH is being over-engineered, but the Ethereum community reacted positively to the development.

Eric Wall noted that the roadmap did not use the “sharding” terminology, saying rollups are better.

Meanwhile, any criticism of the Ethereum roadmap by Bitcoin maxis will not bother the Ethereum community, given the current performance of both assets. Got something to say about this article, or anything else? Write to us or join the discussion on our Telegram channel. You can also catch us on Tik Tok, Facebook, or Twitter.