Elon Musk to quit as Twitter CEO when replacement found
https://www.bbc.com/news/business-64037261
Elon Musk has said he will resign as Twitter's chief executive officer when he finds someone "foolish enough to take the job". He says he will still run the software and servers teams after his replacement is found. Changes on the platform since his takeover have been much criticized.

The Fear & Greed index went down to 26, still below 30. The number has been around 25 most of the time in the last 4 months, showing investors’ lack of confidence. But on the other hand, the market has been relatively stable, instead of slipping further.

Bitcoin Ahr999 climbed slightly to 0.32, below the bottom line 0.45 and the DCA line 1.2. The numbers reflect that the bear market will last for a long time. Judging from the information above, the prices are still at the bottom zone.

People are worrying about the economic recession that may happen due to the possible interest rise of the Fed. S&P 500 of this year is proving to be the worst since 2008 when this year is coming to an end.

In terms of economy, the Existing Home Sales of November in the U.S. decreased by 7.7%, which has been the 10th month continuously, but with a larger drop range. However, since the inflation is expected to subside, the Consumer Confidence Index of December has been the highest since April, better then the market expectation.

In terms of economy and politics, Volodymyr Zelenskiy, the Ukraine president, went to the White House on Wednesday to meet Joe Biden, the U.S. president. Biden reclaimed that the U.S. seek “just peace” and announced that it would offer 1.85 billion dollars of extra assistance, including MIM-104 Patriot to strengthen Ukrainian’s protection in winter. 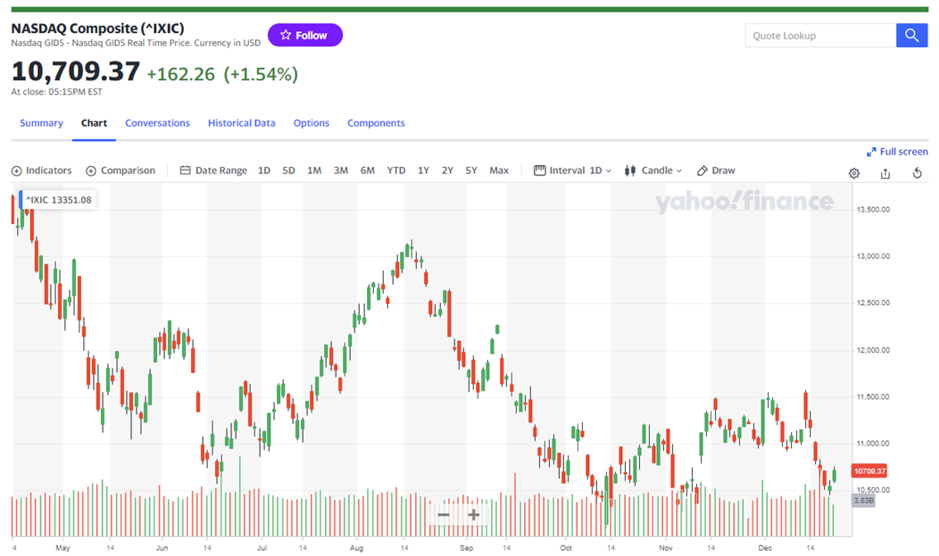 The prices of most mainstream crypto dropped yesterday, ranging from -1.88% ti 0.50%. But TRX proves to be the strongest by rising 0.50%.DOT continues it’s weak tendency of yesterday by falling 1.88%. BTC and ETH increased 0.11% and 0.46% separately, helping to stabilize the market.

Judging from the 4-hour timeline, BTC continues it’s tendency of the day before yesterday and the price stays near 16850. The moving averages haven’t point to a clear future yet and the transaction will fall in the coming Christmas holiday, both of which contribute to the current unclear future.