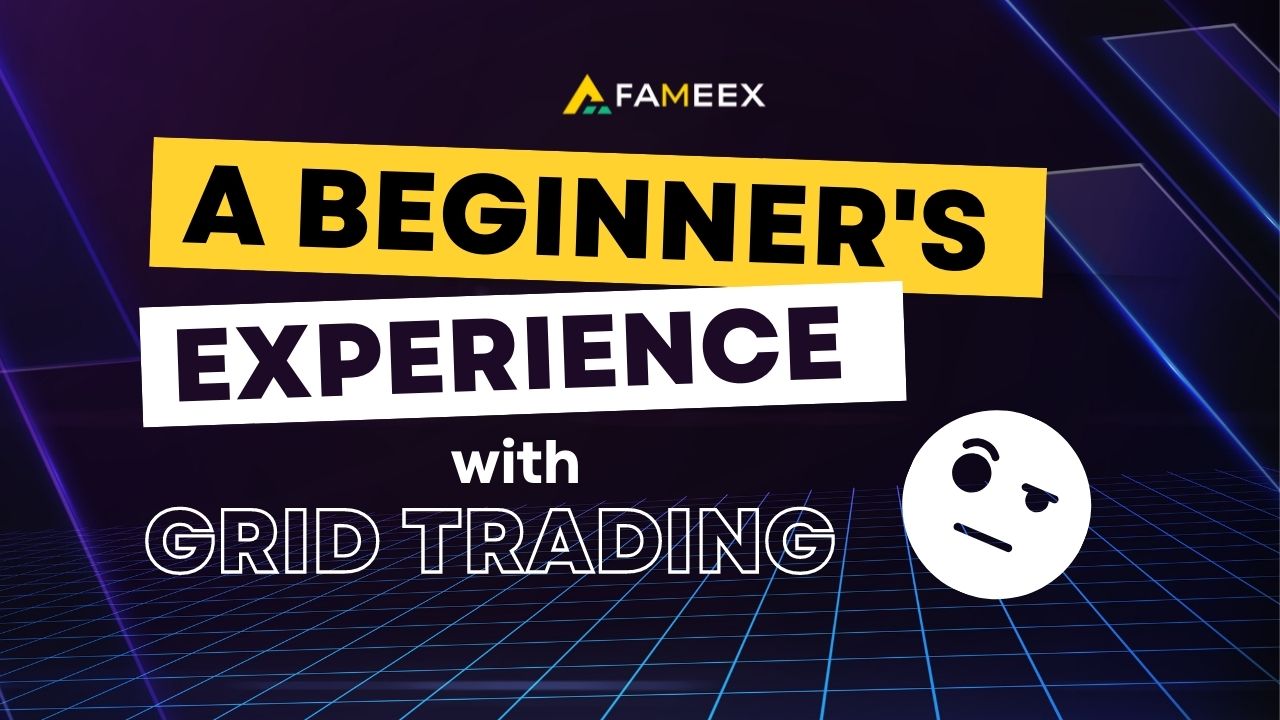 Like many people, I’m far from a professional trader, in my cryptocurrency “career” I've played around with spot and leverage trading, cautiously longing, shorting on 3X and 10X leverage on various exchanges. I’ve used all sorts of exchanges to buy all sorts of coins, in recent years I’ve been more used to trading on DEXs where the only option is to buy or sell into the automatic market maker. Feeling a bit rusty on the old trading game I made a leap of faith and decided to try something I’d never tried before….

On the FAMEEX interface, next to the Spot trading tab, there’s another tab called ‘Quant’, under this tab there are two options, ‘Spot DCA’ and ‘Spot Grids’. I’ve heard of quant trading before, don’t you need a PHD to be a quant trader? It conjured up images of math prodigies studying textbooks thicker than a railway sleeper in the back office of an elite investment bank. When I clicked ‘Grid Trading’, I expected to be faced with reams of incomprehensible data and cryptic equations, but I needn’t have worried, it just looked like the normal charting and order book of a standard trading interface. Wait, there’s something different, what’s this box in the bottom right? 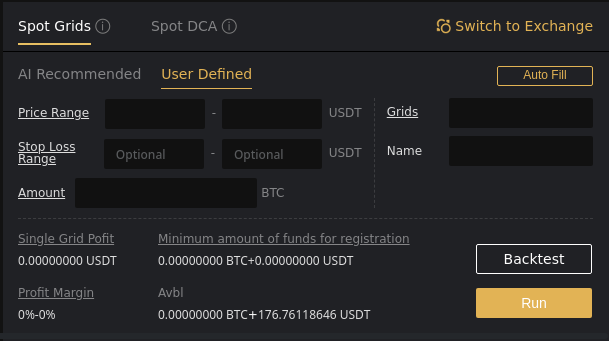 Price Range? User Defined…AI Recommended, what was all this? Time to look up what grid trading actually is…

A grid of orders, OK I get it now, so it’s like a ladder of orders up the chart at regular intervals between a certain range, I see now. Ok, let me try this out with a bit of money and see what happens.

On FAMEEX all pairs are matched with USDT. I checked my wallets to see if I had any USDT. Then I remembered my brother owed me $410, since he’d just got paid from a few commercials (He’s a lighting engineer in the movie industry) Maybe he would be in a position to pay back his older bro. Sure enough, a couple of whatsapp messages later and $410 USDT was winging its way to my trading account from his coinbase!


Time to make my first grid trade, let’s go. So I fill out some reasonable looking parameters and…..

Wait what? I don’t have enough funds? Then I realized, I’m on BTC/USDT, BTC is the most valuable coin on the exchange, with the highest minimum order quantity. My meager balance wouldn’t stretch to making the multiple orders required for grid trading BTC/USDT.

I searched the menu for a familiar friend, ah yes, DOGE/USDT, DOGE has the lowest minimums on FAMEEX, this would work a treat. The next thing I noticed was the “Auto Fill” button on the grid trading interface, I clicked it to see what would happen. 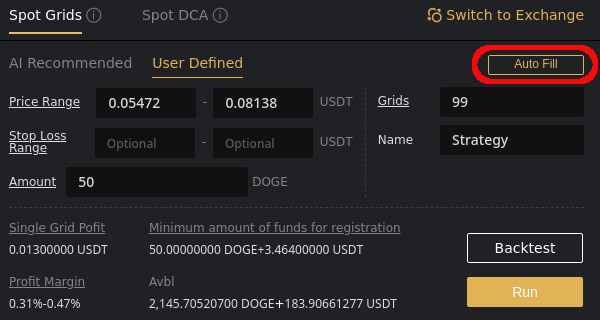 50 DOGE, sounds alright I guess, 99 grids is that a lot? Fortune favors the brave, let’s click run and see what happens. My computer unexpectedly didn’t explode. All that happened was this appeared under the chart in the ‘Strategy’ tab.

Nothing really happened, my balance didn’t drain to zero, all that happened was that a few orders were created in the “Orders” tab. I still had plenty of USDT in my balance so I decided to try another thing, 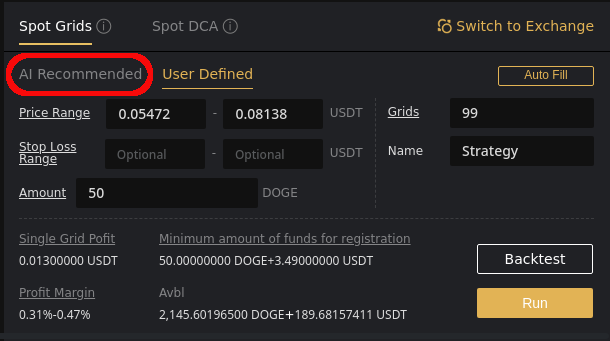 The parameters were pretty much the same as when I clicked ‘Auto Fill’, so, feeling a bit reckless, I decided to click Run. Sure enough in my Strategy tab, this appeared:

Great. I had a strange feeling like I may have overdone it, was this too many trades? Was my balance going to be sufficient? I decided to leave it and check back the next day.

The next day, DOGE had been ranging around the same price that I started at, it was up a few percent and both my grid trades were in profit: 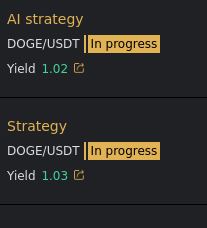 I was starting to get a feeling for what was going on behind the scenes, I could see buy orders being created, and sell orders at slightly higher prices. The strategy was creating buy orders at slightly under the current price, and then when those were filled it would create a corresponding sell order at a slightly higher price. My balance was gradually increasing as the bot bought low and sold high while the candlesticks fluctuated around the price range. Easy peasy. I decided to leave it and check back the next day.

The next day, DOGE was down slightly, but my position's yield had still increased. The only difference was that the bot had created lots more sell orders. I guess if the price keeps going down, the bot keeps “Buying low” and creating more and more sell orders at higher prices with only some being filled on retracements. No matter, I was pretty confident that the price of DOGE would go up again.

The next morning I got an email from FAMEEX: 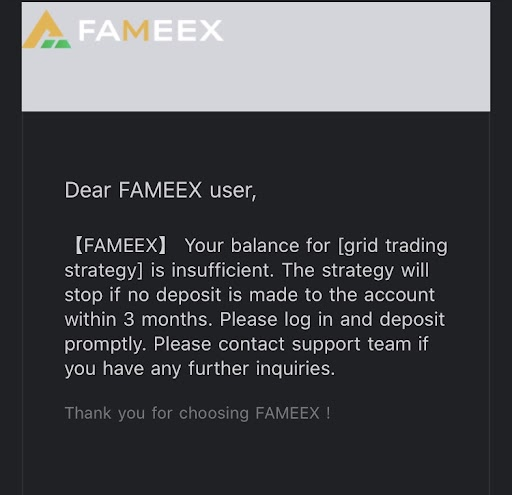 Woops! What’s happened? I logged in and checked the DOGE price, it was down a lot! My bots had been buying and buying and buying on the way down, they’d created over 70 sell orders between them and weren’t able to buy any more DOGE. Oh well, according to the email notification I have 3 months to fix this so I decided to just wait and see. Over the next day I got about 3 more emails from FAMEEX reminding me to fix my position but I decided to just ignore them. 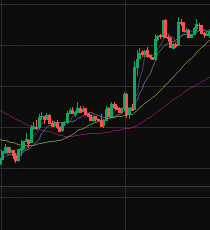 I checked the price of DOGE, Interest rates hikes were priced in and the market was back in bull mode! My bots had managed to sell a whole bunch of orders they’d previously created and now my yield had doubled! Woo! 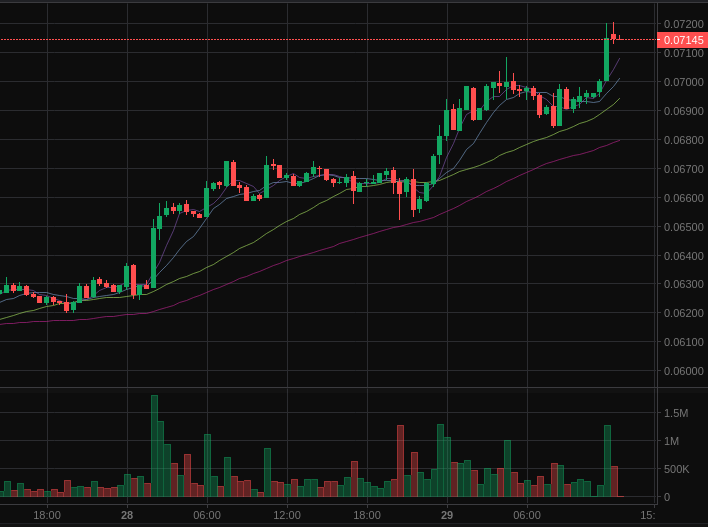 Over the next few days, DOGE went from strength to strength. At this time, my grid trades have been running for about a week and my yield per trade is over 3%!

What have I learned from this grid trading experience? Well, it’s not as risky as you might think. The bot is only buying very small amounts each trade, so your funds are not really “locked” in the trade like it would be in margin trading. I could have easily still done other trades while this strategy was running. The yield is also quite nice, I effortlessly made nearly $8 in a week from DOGE randomly dancing around the chart. The most important thing is: I didn’t LOSE money.

Things I would do differently if and when I next try grid trading:

All in all, I think I’ve done quite well out of my first ever grid trading experience. It didn’t seem to be risking as much money as I thought it would, and after setting up the trade I didn’t really need to do anything except check it once in a while. And 3.5% yield over a week is not bad going. At the time of writing DOGE is still within my range at 7 cents but the market is looking bullish and it might move out of my range permanently. Maybe it’s time to close these grid trades and start another proper one. Would I try it again? YES.