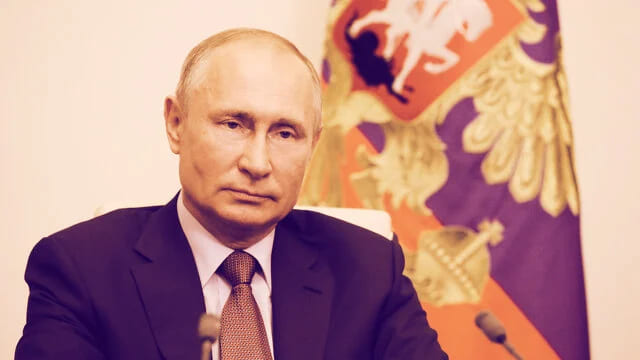 Russian president Vladimir Putin today said that Russia has "certain competitive advantages" when it comes to mining cryptocurrencies such as Bitcoin, according to a transcript posted to an official government website while the central bank last week said that Bitcoin mining should be banned.

His comments came one day after the government's Finance Ministry said it would be "necessary to allow these technologies to develop"—and that a cryptocurrency ban was not necessary.

"As for cryptocurrencies, the central bank has its own position, it is related to the fact that, according to experts of the central bank, the expansion of this type of activity carries certain risks, and above all for the citizens of the country, given the high volatility and some other components of this topic," President Putin said Wednesday in a video call with government members.

"Although, of course, we have certain competitive advantages here, especially in the so-called mining. I mean the surplus of electricity and well-trained personnel available in the country."

Cryptocurrency mining is the process of verifying transactions on the blockchain and minting new coins or tokens using powerful computers. Mining Bitcoin is a process that uses lots of energy and requires expensive machines.

Russian Bitcoin miners provide more than 10% of the computing power to the Bitcoin network but the country's authorities have repeatedly talked about restrictions on the industry. China, which at one point hosted the majority of the world's Bitcoin mining activity, recently banned the practice, citing environmental concerns. The China ban on Bitcoin mining has since caused a mass migration of miners to other parts of the world.

President Putin today added that he wanted the Russian government and the central bank to talk about the issue and reach a "consensus" on the issue.

The Russian government has reportedly been eyeing up Bitcoin as a way to sidestep U.S. sanctions since at least 2019. It is not clear whether the government has, in fact, purchased any Bitcoin.

Meanwhile, the U.S. has threatened Russia with harsher economic sanctions if it invades neighboring Ukraine. Moscow has deployed an estimated 100,000 soldiers near the border and tensions between the West and Russia are escalating.

There has even been talk of cutting Russia out of SWIFT, the system used by over 11,000 banks in 200 countries to make cross-border payments. Could Bitcoin come to Russia’s rescue?