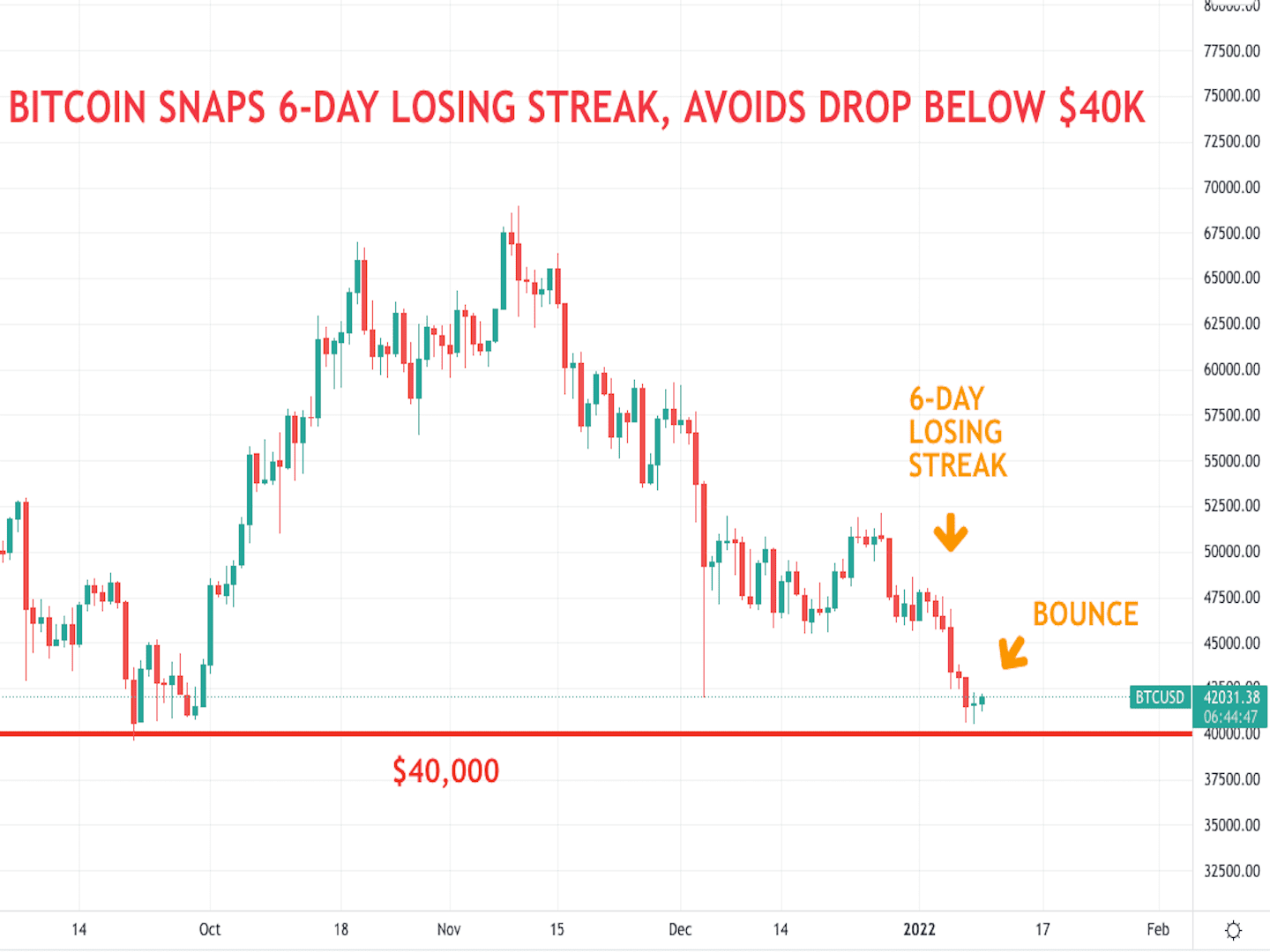 The largest cryptocurrency Bitcoin’s price rose on Sunday, after snapping a six-day losing streak and avoiding a drop below the key psychological level of $40,000 that some cryptocurrency analysts had warned might trigger a steeper sell-off.

As of press time bitcoin (BTC) was changing hands around $42,100, up 2% over the past 24 hours, based on CoinDesk pricing. The cryptocurrency had been on the verge of a seven-day losing streak that would have been its longest since 2018, but the price turned around on Saturday, eking out a small gain, and has stayed on an upward trajectory since.

The price hadn’t fallen below $40,000 since September 2021, and is well off the all-time high near $69,000 reached in November, so there had been speculation that a drop below $40,000 might spur a deeper retrenchment.

“If the market has based at these levels, we might get that short squeeze we’ve been waiting so patiently for,” the Singapore-based crypto trading firm QCP Capital wrote Sunday on its Telegram channel.

January tends to be a seasonally weak month for bitcoin, but this year has been especially harsh, with the largest cryptocurrency still down 9% so far in 2022.

The market was roiled last week by the release of Federal Reserve minutes signaling that officials at the U.S. central bank were starting to discuss whether to take more aggressive steps to tackle an inflation rate now at its highest in almost four decades.

Many investors say bitcoin has benefited in recent years from the Fed’s ultra-loose, emergency monetary policy since the coronavirus hit the economy – including printing more than $4 trillion to bolster ailing traditional markets. So a reversal of those policies was seen as a fresh headwind for bitcoin.
(Article Courtesy of CoinDesk)

PreviousUS Department of Transportation(DOT) Wants to Fund Research into Crypto Token Incentives for DriversNextFounded in 1962, Arab Bank Switzerland Is Quietly Getting Into Decentralised Finance(DeFi), Offering Clients Access to Defi Tokens Like AAVE, COMP and UNI
Other articles in this group