Give that DOGE a bone.

Dogecoin (DOGE), the canine-inspired meme token often associated with electric-vehicle-tycoon-turned-Twitter-owner Elon Musk, was the top performer in October among the 150 digital assets in the CoinDesk Market Index (CMI).

The DOGE price rose 101% during the month, vastly outpacing the 7% climb in the CMI overall. Bitcoin (BTC), the largest cryptocurrency by market value, was up 5.5% on the month, while No. 2 ether (ETH) gained 18%. 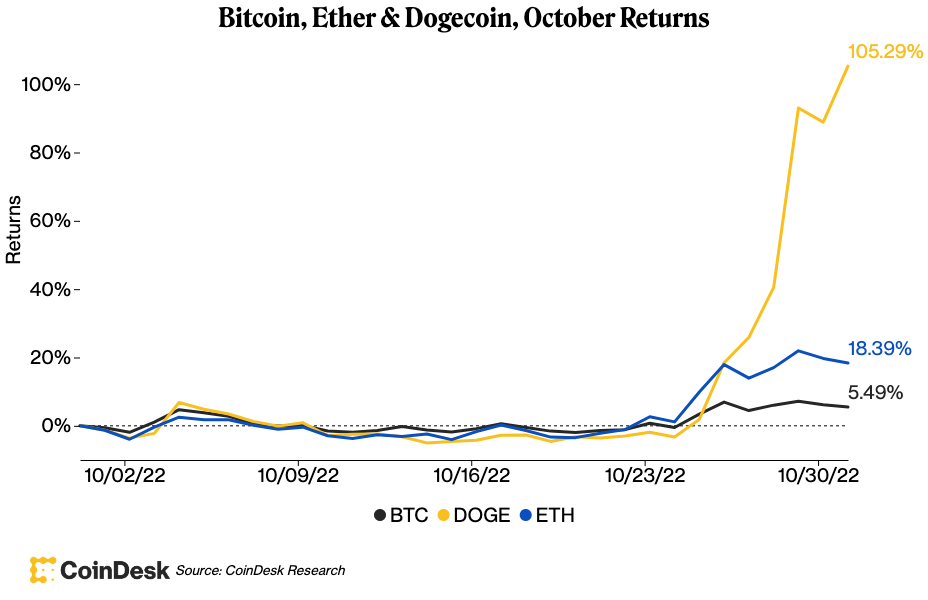 Digital-asset analysts attributed the big jump in DOGE to Musk’s dramatic $44 billion takeover of Twitter – ostensibly tied to speculation that the deal might somehow, eventually, bring value or utility to the Dogecoin blockchain and its eponymous cryptocurrency.

During a May 2021 appearance on NBC’s “Saturday Night Live,” Musk used the line, “Call me the Dogefather.” And in January 2021, Musk used Twitter to send out an image of himself holding up a Shiba Inu puppy – the dog breed that inspired dogecoin.

Musk at one point suggested – perhaps in jest, perhaps not – charging 0.1 DOGE per tweet.

Dogecoin rose “on the back of excitement over Elon Musk's takeover of Twitter,” the digital-asset investment fund QCP Capital wrote Monday in a note on Telegram. “Musk's tweets have created price swings in the past, even suggesting using DOGE as payment for a Twitter subscription.”

“It's the same way as people trading GameStop and AMC,” Talati said. “It’s a token that drove a lot of retail interest.”

Ether’s monthly return was fueled partly by a short squeeze last week. The cryptocurrency has benefited from fresh speculation following the Ethereum blockchain’s Merge last month, which shifted the network to a more energy-efficient “proof-of-stake” network. The change also drastically reduced the pace at which the blockchain is producing new tokens – implying less overall supply.

Bitcoin’s return during the month was more muted, but bulls were enthused by its price jump above $20,000 for the first time in 18 days.

Talati attributed ETH’s outperformance over BTC to “market structure,” given that more traders had been betting against ETH than BTC – and not an indication of“anything fundamentally shifting.”

“Bitcoin doesn't really have a strong narrative right now, whereas ETH still does have the Merge narrative,” she said.

Another big loser was Terra Luna Classic’s LUNC token, which also lost 31% during the month – potentially dashing hopes among traders who had hoped for a recovery following the network’s collapse in May.

LUNA, the native coin of the Terra 2.0 blockchain, the fork that emerged from Terra Classic, slid around 1% during the month. Its controversial co-founder, Do Kwon, denied claims in October that he is on the run from law enforcement, despite Interpol issuing a “red notice” for his arrest in September. Earlier this month, Terra’s developers attempted to revive the LUNA ecosystem and increase user activity with the token.

What’s ahead in November? Talati said the World Cup could spark interest in sports-fan tokens like Chiliz (CHZ), from “the advertising perspective.”

She said she “wouldn't be surprised” to see crypto ads on banners around the stadium during matches – similar to Coinbase putting up a QR code during the Super Bowl in February.

Dogecoin likely will continue to ride waves of speculation. “At the end of the day, there aren't like financial applications built on top of it,” Talati said.