Century-old dictionary Collins just announced the word of 2021 last week. The world has witnessed the rise of blockchain. Obviously not a new technology, blockchain however is often mentioned together with some negative terms such as money laundering, opportunist, scam and fraud. It takes years for more of us to finally understand this very technology is the imminent future. Back to the list of Collins Dictionary, non-fungible token or NFT is the final winner by beating its “peers”: metaverse and crypto. Sadly, GameFi did not make the list but you have a reason to understand what GameFi is. It is heavily interwoven with NFTs and the concept of the Metaverse. 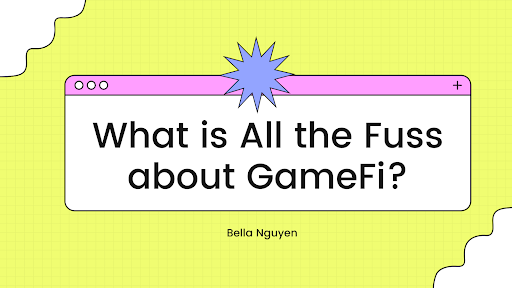 GameFi is a fusion of Game and DeFi. Powered by blockchain and crypto technology, GameFi is created to blend the fun of playing games with the financialization of in-game economies. The GameFi concept was first mentioned at the 2019 World Blockchain Conference in China and the term “GameFi” was used later by DeFi trading platform, Yearn Finance’s founder Andre Cronje in a tweet next year.

Most GameFi platforms can be categorized into multiple types and mostly focus on products such as card game(CAG), real-time strategy(RTS), role play game (RPG) and simulation game (SLG) happening in the background of a well-designed virtual worlds and emphasize more about he immersive experiences and interactions between players.

These gaming platforms add the fun part through NFTs. For example, users can own digital pets, in the form of NFTs and through the play to earn model, players can gain profit by levelling up the NFTs or in the case of the digital pet, more of the baby pet could be born or hatched through the in-game gimmicks.


How does GameFi work?

The play to earn model gives players financial incentives to play games. As it’s still in the early stages of development, the games are more about generating profits than gaming itself and “luck” may play a role during the whole gaming journey.

Compared to the traditional “Deposit to Play” or “Free to Play” models of video games, the most revolutionary approach of GameFi projects is the play to earn model. In the simulation world of the GameFi platforms, players can hatch eggs and get upgraded through battling. From which players gain the fun of playing games and in the meantime earn the tokens, in-game equipment and NFTs which can be traded in the marketplace.

Combine the concept of DeFi

Some GameFi projects combine the concepts from the DeFi sector to reward gamers such as yield farming, liquidity mining and staking. This idea of DeFi provides a chance for gamers to generate passive income from blockchain games.

Most GameFi platforms focus on products such as virtual worlds and RPGs and emphasize more about the immersive experiences and interactions between players. These gaming platforms add fun through NFTs. For example, users can own digital pets, in the form of NFTs and through the play to earn model, players can gain profit by levelling up the NFTs or in the case of the digital pet, more of the baby pet could be born through the in-game gimmicks from which players can gain the profits while having fun.

Why are GameFi & NFT Related?

Before playing a blockchain game, players are told to hold certain in-game items or digital assets to start. Those items could be avatars, weapons, instruments, pets and lands which are served as non-fungible tokens. This is where GameFi meets NFTs.

Those digital assets acquired on the gaming platform can be traded on NFT marketplaces for profit and later exchanged to fiat money.

To sum up the above,

players in the GameFi platforms control the in-game assets in the forms of gaming tokens and NFTs. These NFTs can be utilized as liquid mining tools which can create the assets liquidity through DeFi.

Some may frown on the gambling aspect of some GameFi projects but it should be noted again that we are still at the beginning of the trend. Some projects add gambling features to attract more players. However, we are seeing more new projects with more refined features that allow players to win a game through strategies which brings palyers back to the nature of gaming itself which, I believe, can finally stand the test of time and go beyond the GameFi hype.

GameFi: The Path to and Foundation of the Metaverse

Again, there’s hardly a consensus of what exactly the Metaverse is for now. GameFi however has been seen as an entrance to the Metaverse. A possible scenario of it is gradually revealed through GameFi as the two share the following features.